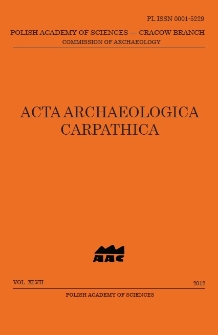 Middle Palaeolithic land exploitation strategies remain as yet an unexplored element in our understanding of Neanderthal behavioural patterns. Many different approaches to the problem were so far developed. Among others, biological, economic or environmental data concerning Neanderthals were considered as relevant. One of the focus points in such divagations is the issue of raw materials economy as undertaken by Neanderthals. The long-distance transport of knappable minerals (as a basis for the stone tools production) allows an insight into the economy and understanding of the size of land in use by Neanderthals group. Addressing this particular issue from the perspective of the Western Carpathian Mountains allows us to track the trails of mobility or trace possible contact zones between groups, and also to state, that at least in some circumstances Neanderthal groups were infiltrating and possibly crossing this highly elevated area on the S-N axis.

The paper discusses the discovery of a single lithic artefact from the Dąbrowa Tarnowska 37 site. The lithic, based on its technological and typological characteristics, can be associated with the Middle Palaeolithic. This is an important find due to the fact that, in the area of the Sandomierz Basin, settlement of that period is confirmed by only a few single finds discovered exclusively in the eastern and central parts of the basin. The lithic has been defined as a Levallois point, although a different interpretation, such as its being a by-product of Levallois core shaping, can not be excluded. It was made of Jurassic flint of undetermined provenance, probably originating from moraines. Precise dating of the find is not possible. It was been found on the surface of fluvioglacial deposit of South Polish glaciation (Elsterian) age. The chronological framework of this glaciation preceded the well-proven use of Levallois techniques in the south of Poland (Biśnik cave, Ciemna cave, Kraków-Zwierzyniec 1).

At the end of 2018, when the Hučivá Cave (Hučivá diera, Rausch Keller) was explored in Tatranská Lomnica, profile deposits in rear areas of the cave were found disturbed by an amateur excavation. One stone artefact was first found in back-dirt clay-layer material at the excavation pit, later joined by four more specimens from the cleaned pit profile. The Typological analysis of the artefacts shows, that their closest parallels are found in inventories of the Magdalenian culture. Hučivá is the only cave in the whole Tatras with documented prehistoric settlement and the only Slovak cave with evidence of the Magdalenian culture. The discovery provides new information concerning subsistence strategies of late Pleistocene hunters in High Tatra Mountain landscapes. In light of this discovery, the possibility of seasonal movements along the northern slopes of this mountains range to the east and then south, through the mountain passes to the upper Spiš region should now be considered.

The authors draw on their experience and past mountain landscape studies to describe an emerging collaborative research project designed to conduct advanced field studies and generate (and test) archaeological landscape models of past hunter-gatherer populations as well as pastoralist and early farming community seasonal transhumance migrations between lowland river valleys of Poland’s Podhale Basin and high altitude forests and meadows its adjacent High Tatra Mountains.

In 2017, a new neolithic site was discovered south of the village of Liptovské Matiašovce, on the elevated ridge of the Bochníčky site. Numerous finds of sherds, daub and chipped lithic industry from dominant Jurassic sub-Kraków flint were obtained by a primary survey and a succeeding small evaluation excavation in form of three trenches. Decoration of the thin-walled neolithic pottery of mostly semiglobular shapes points to presence of the younger Linear (musical note) Pottery culture, Želiezovce and rarely the Bükk culture. Unique chipped artifacts made of obsidian are also associated with the last mentioned culture. Part of the chipped lithic industry from the survey belongs to the late Paleolithic and Mesolithic. Among the previously documented rare neolithic settlements from the region of Liptov, the newly discovered site represents the richest neolithic settlement which should be complexly studied. It is being destroyed by ploughing every year.

The paper presents Lusatian culture bronze artefacts recovered in the Orava region in northern Slovakia, which allows for tracing connections with the territory of present-day Poland in the Late Bronze Age and the Early Iron Age. The object is to discuss the provenance of the Lusatian bronze artefacts and analyse possible intercultural contacts with the north, across the Carpathians.

The term Pakoszówka-Bessów type pottery is used to describe a specific kind of wheelmade pottery with easily abradable surfaces mostly dated to the 3rd century AD. Site 3 in Bessów, Bochnia Commune, Lesser Poland, is located in the dense Przeworsk culture settlement micro-region occupying the right bank of the lower reaches of the Raba River. The most characteristic feature of locally produced artefacts from Bessów, and to a lesser extent from other sites in the region, is the presence of enormous amounts of this pottery. The aim of laboratory analyses carried out on Pakoszówka-Bessów type pottery from Bessów was to verify the hypothesis that abradability of sherd surfaces is attributable to the alteration effect.

The objective of this article is to present the funerary eye and mouth plates use as a funeral custom from the 10th century in the Carpathian Basin. Presented artefacts, which were interpreted as funerary eye and mouth plates, were sewn onto the shroud used to cover the skull or were placed on the eye cavity and on the mouth of the deceased person. The collected artefacts were divided into four parts, based on the formal aspect. Their characteristics were examined. These artefacts show strong connections with specimens known from eastern Europe, especially with the ones known from the Ural. The ancient Hungarians brought this funeral custom to the Carpathian Basin in the course of their conquest. Ethnic studies are needed to understand the discussed custom, and the subject requires further research.

The subject of this article is the fragmentary silver plate of a gilded silver sheet braid ornament decorated with palmette motifs, which was deposited in the storage of the Gorgippia Archaeological Museum (Krasnodar Krai, Russia) in 2015, together with several other finds. The finds had been discovered at a site named Andreyevskaya Shhel, located a few kilometres south-east of the town, at the north-western hill area of the Caucasus. Among the artefacts deposited in the storage in 2015, there were other finds related to the 9–10th centuries (e.g. silver plate of a sabretache, gilded bronze belt mounts, bronze strap end, sabre, bow case or sabretache mount, fingering, etc). The braid ornament, with many analogies in the Carpathian Basin, could have reached the North Caucasian region by means of long-distance trade. This hypothesis is sustained by the considerable dirham-finds in the Carpathian Basin, which indicate the integration of this region – and of early Hungarian commerce as a whole – into the Eastern, Muslim trade network.

The octagonal tower of the ruined castle Ojców (southern Poland) is considered one of the most impressive foundations of king Kasimir III the Great (†1370). The purpose of this paper is to discuss the results of archaeological dig carried out in 2016 and to combine it with written evidence to form the basis for the reconstruction of its long-gone past. The tower is an octagon in plan, has 11.55 m in diameter and has walls that are ca. 2.7-2.8 m thick. On the inside it is round, 6.2 m in diameter. It was built of carefully processed hewn limestone set in lime mortar and what is important to note, it is the only known castle tower realisation of king Kasimir which was built on such blocks. On the other hand, the raw material used for building the tower has close affinities with church foundations of the king (e.g. in the collegiate church in Wiślica).

Noteworthy, the fieldwork of 2016 provided rich assemblage of architectural details, including stylistically homogenous window or portal framings with characteristic pear-shaped mouldings and hollow-chamferred profiles, which likely relate to the earliest stages of the castle, perhaps already to the realisation of king Kasimir. There is a high degree of confidence that these elements were originally placed in the tower, and, if so, they determined rich and representative design of the whole structure.

According to the author of the paper, there are strong indications that the impressive octagonal tower which is distinguished among the other contemporary defensive realisations by its building material, size and, possibly, a decor, was built as a commemorative realisation, given to honour the memory of the father of king Kasimir – Władysław the Elbow-high, who according to the local tradition, early in the 14th c. found a refuge in a cave located nearby (note the castle’s name: Oczecz − further Ojców − in Polish means Father).

Last but not least, the archaeological dig brought to light the remains of an undefined building from the late 15th-mid 16th c. west from the tower, the remains of post-medieval (17th c.?) wall adjacent to the tower from the north, and some important stratigraphic observations, which allow to state that the octagonal structure witnessed some extensive restoration work in the second half of the 15th c.

Andrzej Zaki’s excavations in the Carpathian mountains, the Alps and the Andes are relatively well-known, however not many heard about his planned excavations in the Himalayas and in the Tibetan Plateau area. This paper is devoted to Andrzej Zaki’s preparations of the expedition, which was Professor’s another project regarding mountain archaeology. The expedition to the Himalayas and to the Tibetan Plateau planned for the end of the ’80s and the beginning of ’90s had been preceded by careful research on the history of human settlement in this area. The research was focused not only on written sources but it also included close contacts with the Office of Dalai Lama XIV living in Dharamsala. Polish Himalayan climber, Wanda Rutkiewicz also played a significant role in the project. The aim of the planned archaeological excavations near the chosen Buddhist monasteries was focused on the creation of a more precise chronology of antiques found during precedent excavations.

The aim of Editors of AAC is to publish papers on archaeology, history, linguistics and geology which are related to issues of prehistoric and Early Medieval settlement in the Carpathian region, and also, to trans-Carpathian contacts and to the special nature of settlement in mountainous areas. The latter consideration makes the Editors of AAC interested also in publication of papers which have as their focus other mountain regions in and outside Europe.

The precondition for publication in AAC is that the submitted paper 1). has not been published elsewhere; 2). has not been submitted for consideration to other editors; 3). the author’s (or authors’) home institution has given approval for publication in AAC (# 3 is valid as of January 2012).
The papers published in AAC express the views of their author (authors) and by no means were written to reflect the views of the Editors or the Publisher.

For Guidelines for Authors, see: