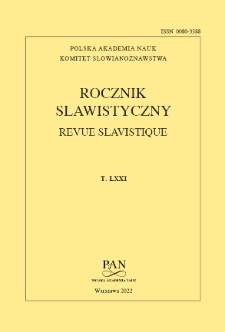 One of the diffi culties of Slavic etymology which also occur in works devoted to the reconstruction of Proto-Slavic vocabulary, is the problem associated with distinguishing words, with an identical or similar sound, of native origin, and borrowings. The article considers four situations of this kind. The reconstruction of the allegedly Proto-Slavic word *kova one adduced the dialectal Croatian kȏva ‘quarry’, whereas it is a local phonetic variant of the well-attested noun kȃva ‘quarry; pit, trench; mine’, borrowed from the Italian (and Venetian) cava ‘quarry; mine; pit; cave rn’. Among the descendants of the Proto-Slavic *kojiti ‘to soothe, to alleviate’ one included the dialectal Croatian kojȉti ‘to wind a rope, to haul in a net’, whereas it is a fi shing term borrowed from the dialectal Italian coir ‘to wind a rope’; in this context one considered the dialectal Kajkavian Croatian kojiti ‘to breast-feed; to cultivate, to nourish’ (which heretofore was unfamiliar to Croatian scholarship), the actual descendant of the Proto-Slavic *kojiti. The dialectal Croatian lȕća ‘a lump of earth’ was said to be derived from the earlier *glut-ja from the Proto-Slavic *gluta ‘a dense lump of something; protuberance; knag’, whereas the geography indicates that it is more likely a Romance borrowing which is etymologically related to the Latin luteum ‘mud’. In this context one considered the Čakavian lȕća ‘skull’ and ‘a species of a nocturnal moth (death’s head hawkmoth, Acherontia atropos), which is probably related with this Romance borrowing. Apart from the unquestionable Proto-Slavic *klǫpь ‘bench’ one also reconstructed the proto-forms *klupь *klupa, whereas the Slavic words, which were supposed to indicate original forms featuring the root -u- are borrowings from German: Kashubian klëpa ‘a sandbank which protrudes above the sea level’ from the German Klippe ‘coastal rock’, Croatian klupa ‘an instrument which is used to measure the diameter of a tree trunk’ from the German Kluppe, which has the same meaning in the technical language.
Go to article

The paper presents an analysis of the voicing of the phoneme /v/ in modern spoken Macedonian. The phoneme /v/ in the standard Macedonian language is classifi ed as a fricative, but some of its characteristics separate it from the other phonemes in this group. This is due to the fact that this phoneme was once a sonorant. In a part of the Macedonian dialects this phoneme is pronounced with marked voicing to this day. This phenomenon is then refl ected in the pronunciation of standard Macedonian. Our analysis is based on a selected corpus of examples that have been spoken by speakers from various dialect origins, in order to assess the any differences in pronouncing of the phoneme /v/ when placed in different phoneme contexts in the word.
Go to article

The use of Church Slavonic texts as resources for the study of the history of Macedonian language requires a serious deep level analysis in order to defi ne the structure of the Church Slavonic language system on all its level. The structure of the literary language can be differentiated in several types of features: specifi c literary features unknown in the dialectal language; hybrid features, i.e. features based on dialectal grounds but developed in Old Slavonic in a specifi c way; dialectal features of various origins, differentiated chronologically or locally. The Macedonian Recension of the Church Slavonic language from its gradual beginning during the 11th century, especially in the second half, reaches its full development in the 12th century, when there is a consolidation of the basic norms of the Macedonian Church Slavonic literacy. The consolidation of these norms is connected and in continuity with the Old Slavonic Glagolitic period in the work of the Ohrid literary center. The paper presents representative examples that characterize the language of the Macedonian Old Church Slavonic literacy on orthographic, phonological, morpho-syntactic and lexical level.
Go to article

A newly published monograph by Vladimir Cvetkovski (Cvetkovski 2017) has given rise to a short examination of some Turkish loanwords in Bitola Macedonian, partially in comparison with the classic treatment of the topic presented by Olivera Jašar-Nasteva a few years ago (Ja{ar-Nasteva 2001). Besides, some methodological remarks and, fi rst of all, a rule concerning treatment of sonorants in assimilation processes in Macedonian (see bilbil) are suggested in the study.
Go to article

The author states that the grammatical description of a language should be conceived in the frame of the theory: “meaning > form”. As an example to prove the adequacy of that statement she presents an outline of the semantic analysis of the grammatical category of person. The traditional grammar presents ‘person’ as an infl ectional category of the verb, exponent of the formal congruency of the verbal predicate with its implied argument in the form of the nominative noun phrase. From the semantic point of view ‘person’ is the central category guaranteeing success full act of linguistic communication: it enables us to identify correctly active participants of the speech event, as also those active in the spoken of event.
Go to article

In the frame of the grammatical description “from meaning to form” the author promotes the thesis that arguments implied by verbal predicates stand in the syntactic position primarily designed for noun phrases.
Go to article

The article addresses prosodic characteristics of the new intonation contour which can be observed in spontaneous speech in the contemporary Russian language. The study focuses on the attempt made to identify the most relevant criteria of this new intonation construction and to explain the reasons underlying its occurrence.
Go to article