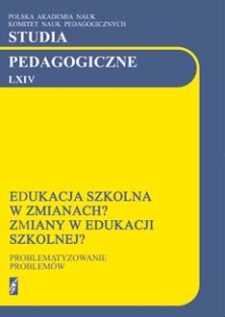 In the second part, the author focuses on the issues of expectations inscribed in utopian projects (“great expectations”). pedagogical utopias and relations between utopias and popularization of normative (formal) or informal pedagogies are subjected to analysis. The author makes here some references to the concept of post-materialistic society, attempting to elicit relations between this type of society and popularization of nonformal pedagogies.

The aim of this article is to present circumstances of South american schools functioning in disadvantaged societies on the examples of brazil and peru. Those local societies have been struggling with social and educational poverty, illiteracy, ethnic conflicts, pressures connected with gangs’ activities, etc. in many cases they try to solve their problems on the basis of school which is the center of social activity. These issues are little known in poland and only from literature and journalistic writing what has created their stereotyped image. Meanwhile, you cannot overestimate pedagogical implications of this phenomenon.

The expectations of South american local societies are in many cases not the same as the expectations of school defined by creators and administrators of the education system. Pressures and conflicts usually are caused by discrepancy between the activities of the central institutions and the needs (expectations) of different ethnic groups, clans, families and individuals. Students speaking dialects or the languages of ethnic minorities, normally experiencing domestic violence and forced to work on the border of law, are regarded by the education system as the others/aliens. in such a situation the assistance comes from volunteers and professional educators working for non-governmental organizations. Many of them refer to the ideas taken from Freire’s ‘pedagogy of the oppressed’. he was convinced that a man will never be free alone and his hope of freedom lies in education realized in cooperation with the others. The condition of liberating the oppressed individuals and groups from treating themselves as inferior, powerless, dependent on the others’ support ( which is typical for disadvantaged communities) is, according to paulo Freire, obtaining a new level of awareness through, among others, participating in educational projects based on the idea of social dialogue and creating the feeling of independence, elf-responsibility and co-responsibility for their own community.

In reflection, which is the basis of the above article, i am trying to answer the following question: in what circumstances a school can be a place of social dialogue and fulfilment of basic expectations of disadvantaged communities members? i assume that even in such exotic societies as Latin american countries you can find a lot of inspiration for solving problems similar to those encountered in poland.

The article describes the relationship between the local community and the primary school considered as “place” within the meaning derived from the book by yi-Fu Tuan “Space and place: The perspective of experience”. The article compares the cases of two schools in the city of bielsko-biała (the city has a population of 175 thousands inhabitants). One school is overcrowded, yet its future existence has been secured. The second school, however, was first transferred to another location and it eventually went into liquidation in 2012. The article demonstrates then underlying reasons and consequences of losing the school as place. Moreover, it indicates potential problems emerging in such cases altogether with a set of possible solutions.

Parental participation in co-management of state school becomes a key issue for democratization of public life in poland and for the quality and effectiveness of civic education of the young. The system of education needs social control, first of all of those whose children are subjected to school duty. “Such will the Republics of poland be as their youth is educated” is the thesis forming the foundations of the school system in the 3rd Republic of Poland. In compliance with the postulates and ethics of Solidarity, the system was supposed to be self-governing. What is analyzed in this study is the relation between politics and school education in the normative-empirical dimension. The (so far unpublished) research results of the author's own studies on democratization of state education are popularized here. This is done, after the dispute on some studies diagnosing the nationwide lack of socialization, in order to indicate subsequent aspects of fiction and appearances of the central authority, the rule of safe position employment, common paralysis of parental care, as well as natural expectations and aspirations which should be fulfilled by the subjects running state schools.

Educational policy is a complex social phenomenon which both determines and is determined by political, socio-cultural, economic or demographic conditions. It is treated as deliberate activities of state and local authorities strictly related to educational practice. Therefore, each educational policy should be a planned activity which is based on a broader programme and which takes into account developmental strategies not only of education but also of the region or state. The period following the system transformation in Poland has involved numerous activities which – from teachers' perspective – have been treated as unexpected or even threatening their professional situation or the whole education. however, J. Rutkowiak emphasizes that relations between politics and pedagogy result from social engagement of both educationalists and teachers in politics and, thus, it is indispensable to treat politics as a dimension of their daily functioning at work [1]. The following questions are raised: what are actual teachers' expectations from politicians and the educational policy? how do teachers assess the educational policy and situate it in their professional daily routine? Referring to Rutkowiak, is this policy a significant dimension of their daily functioning at work or a factor of unpredictable results which may appear at any time – the expected unexpected as the title suggests? what is presented in this study are some analyses of the data collected in the studies on educational policy and politicians, conducted among teachers in 2000–2014.

In the article the author discusses the relationship between education and socio-cultural needs. The socio – cultural reality is the reality of a permanent change. It is difficult to describe and even more difficult to understand. The specific character of qualitatively new changes in the relations between globality and locality implies a completely new perception of reality, ways of interpreting the world, and a new quality of judgments about the condition of the modern man. This reality is also a ”multiplicity of worlds”, which means a large number of possibilities to create oneself. What individuals perceive as their ”own” has the biggest developmental potential when it is worked out on the proactivity path. proactive people are distinguished by interrelated features: the search for a possibility of change (the environment examination, going beyond limitations of a given situation), establishing effective and change oriented goals (opening new paths of action), foreseeing problems and remedia measures (the analysis of one’s own achievements, looking for signals of threats or dangers), looking for new ways of achieving goals (the ambition is to make a new tradition).

The article presents youth expectations towards:

– school, presented by the competences of the eighteen-year-old,

– the world, reflecting the concept of one’s own identity,

– oneself expressing the condition measured by satisfaction with oneself.

The summary tries to answer the question: can the expectations be fulfilled?

Contemporary school is exposed to a number of tensions and conflicts arising from the difference in expectations of everyday interactions. in particular, this can manifest itself in difficult situations for which shall be the student's social maladjustment or a threat to social maladjustment, because the multiplicity of involved actors can express different beliefs about the same substance and procedure changes desired and their effectiveness. The solution thus understood the conflict of expectations may be an institutional alliance, instead too far-reaching assumptions about the collaboration.

Expectations are understood as more or less justified beliefs about the future and relate external to us states of affairs (state expectations), ourselves (selfexpectations) or others (interpersonal expectations). in this article are presented state expectations and interpersonal expectations emerging from the process of education student with a disability. This article is based on focus research conducted among teachers and interviews with the head teachers of schools where students with disabilities are taught. The purpose of the article is to show expectations according to exchange theory and finding common and divergent benefit exchange planes between the different actors of the educational process. It turned out that very few of them are the same for all actors. Most of them are assigned to a lesser or greater degree of individual operators. The most important conclusion is the fact that the state implementing educational policy (inclusive) very often dumps the responsibility for the implementation of this policy on local governments, who saw the "economic attractiveness" of student with a disability the chance to see a budget increase and no longer necessarily increase educational opportunities for their students with disabilities.

Self-fulfilling prophecy is seen as an important phenomenon linking social perception with social interaction, being in line with the assumption that conviction creates reality. The adoption of such a perspective upgrades the rank of expectations, which being in control of human behaviour, permeate all areas of people’s activity. Within the area of interpersonal interaction, its participants either perceive what is expected of them or make assumptions about expectations on the basis of behaviour which is directed towards them. Following this lead, and referring to the possibility of co-operation between teachers and parents, we are confronted with a question whether within the anticipated interaction parents may cope as well, or as badly as it is expected of them by teachers. This article attempts to answer this question as well as to analyse the relationships between teachers and parents through the prism of the idea of self-fulfilling prophecy, bearing in mind that the phenomenon itself consists of extremely complex interaction of cognitive and behavioural factors.

Presented article contain the teachers opinions of the perceived social expectations in relation to their own expectations of both the institutions of school and local educational authorities. The starting point is a thesis that asymmetrical and disproportionate expectations conducive to the construction of the reduced school reality a specified group of students. as reality shows school does not always reflect the social expectations, which is closely connected with the attitudes of teachers in mainstream schools. however, their expectations of working conditions and the same students with disabilities often remain inconsistent. To identify and interpret the reality that create the appearance of the school, the topic is examined in the context of the concept of the reduced space and the theory of games.