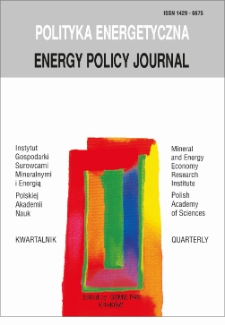 The natural gas supply is used from Russia Federation as a political instrument in the geopolitical and territorial conflict with Ukraine. The effectiveness of Russian strategy towards Ukraine is due to the fact that power in Kiev is also exercised by the pro-Russian politicians and supported on the part of Ukrainian oligarchs. The two countries are interdependent in terms of energy by means of the existing gas infrastructure and long-term contracts, because Ukraine guarantees the Russian Federation the transit of natural gas to Europe through its system of transmission gas pipelines, and Russia pays for the transit and used to supply the agreed amount of gas to Ukraine. For the first time – in 2016 – Ukraine didn’t import natural gas directly from the Russia Federation. This article attempts to obtain an answer to the research question, whether Ukraine actually strives to diversify its natural gas supply. What part of this policy is the Ukrainian political instrument in terms of Russia, and what part is the real political objective? Especially in the context of the gas contract between both States, ending in 2019. What role will be played the underground gas storage in the geopolitical struggle? Despite Nord Stream II the Russian Federation still needs the Ukrainian pipelines to fulfill contractual obligations in gas supplies to Europe. What are the strategic goals of the energy policy of Ukraine and Russia? The geopolitical as well as geo-economic theories will be applied. Moreover, a factor analysis as well as a decision-making analysis will be used. The political analysis method and the forecasting technique are applied to obtain, not only theoretical, but also practical input.

The article presents the author’s considerations on the significance of the investment package diversifying natural gas supplies as part of the Northern Gate in ensuring Poland’s energy security. Data found in literature concerning the possibilities of importing the raw material by sea (terminals, gas pipelines) includes investments at various stages of concept development and construction. However, these documents lack cohesive information about a full investment package being implemented. The author has thus attempted at creating variants concerning the diversification capacities of the Republic of Poland in reference to several key offshore and onshore projects. A problem has therefore been formulated: To what extend will the Northern Gate investment package increase Poland’s energy security as a result of increased supply of natural gas from the sea? To answer this questions, researchers were forced to verify their working hypothesis which assumed that Northern Gate investments including a comprehensive package of projects had the potential of significantly improving the level of energy security in Poland by extending the possibility of importing natural gas. To solve the problem and verify the hypothesis, the researchers applied systemic analysis, deduction and variant analysis, which were used to estimate the possible import capacities of the raw material by sea. As a result of the works, the researchers created four variants including various investment projects assuming the import of 7.75 m3 to 30,95 B m3 of natural gas a year by sea. The variant which was adopted as the most probable indicates the possibility of importing 17.75 through 22.75 B m3 of gas a year, which is 111% of the average annual demand in Poland.

The implementation of EU environmental regulations in the energy sector is challenging for the power industry of its member states. The main role is played by documents such as the Winter Package and, especially, the Directive of the European Parliament and of the Council on the emission limits of certain pollutants and the implementation of BAT conclusions in order to achieve the EU’s decarbonization objectives. These regulations impose a greater need to control harmful substances emitted to the atmosphere while using fossil fuels, including hard coal, which is the main fuel for domestic units. At the same time, the decline in domestic fossil fuel production and decrease in the quality of parameters of the hard coal makes it difficult to purchase the proper fuel for power plants. As a consequence, the costs of hard coal increase. The article presents the concept of a mathematical model that can be applied for the optimization of coal supplies. The employment of this model allows one to achieve cost reductions. One of the advantages of the proposed tool, in addition to minimizing the cost of purchase and use of hard coal, is its rational management, especially for companies producing and using hard coal.

The paper investigates the supply structure of the capacity market in Poland in the coming years. The results of the capacity auctions conducted in 2018 are analyzed for this purpose. Three auctions were held at that time. The products traded in the capacity market are capacity obligations for the following years: 2021, 2022 and 2023. The auctions were organized in accordance with (i) he Act of December 8, 2017 on the Capacity Market and the (ii) Capacity Market Regulations published by the Polish Power Grid. The source of data used in this study is the official information of the President of the Energy Regulatory Office on the final results of the main auctions for 2021–2023 delivery periods. The list of the capacity suppliers who won capacity auctions contains the type of capacity market units, the volume of capacity obligations, the duration of capacity agreements and the business name of the capacity suppliers. The conducted analysis indicates that the auction for 2021 was won mainly by existing units (45.81%) and refurbishing units (33.51%). In subsequent years, the share of existing generating units is significantly higher and amounts to 91.67% for 2022 and 84.54% for 2023. The results of the study carried out in this paper also show that one energy company, being the owner of power generating daughter companies, has a very high share in these capacity auctions. The PGE Capital Group contracted 51.95% for 2021, 69.92% for 2022 and 64.44% for 2023 of the total capacity obligation. The volume amounts to over 70% of their total installed capacity.

Hybrid Renewable Energy Systems connected to the traditional power suppliers are an interesting technological solution in the field of energy engineering and the integration of renewable systems with other energy systems can significantly increase in energy reliability. In this paper, an analysis and optimization of the hybrid energy system, which uses photovoltaic modules and wind turbines components connected to the grid, is presented. The system components are optimized using two objectives criteria: economic and environmental. The optimization has been performed based on the experimental data acquired for the whole year. Results showed the optimal configuration for the hybrid system based on economical objective, that presents the best compromise between the number of components and total efficiency. This achieved the lowest cost of energy but with relatively high CO2 emissions, while environmental objective results with lower CO2 emissions and higher cost of energy and presents the best compromise between the number of components and system net present cost. It has been shown that a hybrid system can be optimized in such a way that CO2 emission is maximally reduced and – separately – in terms of reducing the cost. However, the study shows that these two criteria cannot be optimized at the same time. Reducing the system cost increase CO2 emission and enhancing ecological effect makes the system cost larger. However, depends on strategies, a balance between different optimization criteria can be found. Regardless of the strategy used economic criteria – which also indirect takes environmental aspects as a cost of penalties – should be considered as a major criterion of optimization while the other objectives including environmental objectives are less important.

According to the European Environment Agency (EEA 2018), air quality in Poland is one of the worst in Europe. There are several sources of air pollution, but the condition of the air in Poland is primarily the result of the so-called low-stack emissions from the household sector. The main reason for the emission of pollutants is the combustion of low-quality fuels (mainly low-quality coal) and waste, and the use of obsolete heating boilers with low efficiency and without appropriate filters. The aim of the study was to evaluate the impact of measures aimed at reducing low-stack emissions from the household sector (boiler replacement, change of fuel type, and thermal insulation of buildings), resulting from environmental regulations, on the improvement of energy efficiency and the emission of pollutants from the household sector in Poland. Stochastic energy and mass balance models for a hypothetical household, which were used to assess the impact of remedial actions on the energy efficiency and emission of pollutants, have been developed. The annual energy consumption and emissions of pollutants were estimated for hypothetical households before and after the implementation of a given remedial action. The calculations, using the Monte Carlo simulation, were carried out for several thousand hypothetical households, for which the values of the technical parameters (type of residential building, residential building area, unitary energy demand for heating, type of heat source) were randomly drawn from probability distributions developed on the basis of the analysis of the domestic structure of households. The model takes the coefficients of correlation between the explanatory variables in the model into account. The obtained results were multiplied so that the number of hypothetical households was equal to 14.1 million, i.e. the real number of households in Poland. The obtained results allowed for identifying the potential for reducing the emission of pollutants such as carbon dioxide, carbon monoxide, dust, and nitrogen oxides, and improving the energy efficiency as a result of the proposed and implemented measures, aimed at reducing low-stack emission, resulting from the policy.

The main objective of the article is to assess the changes in carbon dioxide emissions in residential sector caused by the implementation of the plans contained in the Air Protection Programs, anti-smog resolutions adopted in 9 voivodeships and the nationwide “Clean Air” program. The reduction of emissions of pollutants which directly affecting air quality and human health, i.e. particulate matter and benz(a)pyrene, which residential sector is the main source, can also affect the amount of emitted of carbon dioxide. To determine the changes in carbon dioxide emissions in the residential sector, emissions of CO2 in base year of 2017 from various energy carriers were determined, plans for reducing of low-stack emission were reviewed and the future structure of energy carriers used in households was estimated. The processes of increasing the efficiency of energy use through both the replacement of boilers and thermomodernization were also taken into account. The obtained results show that the highest CO2 emission reduction of 6% is achieved in case of “Clean Air” program. In frame of this program in 3.5 million of single-family houses a heating system replacement and thermomodernization is planned. Implementation of plans included on Air Protection Programs and anti-smog resolutions can lead to a relatively small (approx. 1%) reduction of CO2 compared to base year 2017. The detailed results of future fuel consumption and CO2 emission for individual voivodeships and for the whole of Poland was presented.