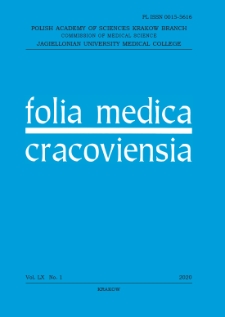 B a c k g r o u n d: Today no established biomarkers are available for the early diagnosis of takotsubo syndrome and its differentiation from ST-segment elevation myocardial infarction. We hypothesized that copeptin and copeptin/NT-proBNP ratio may serve a routine marker combination for non-invasive differentiation.

C o n c l u s i o n s: The serum copeptin to NTproBNP ratio could be an additional tool in the non-invasive differentiation between takotsubo syndrome and ST-segment elevation myocardial infarction. However, further researches are needed.

A i m: The main purpose of this article is to present the main assumptions of the FRAILTOOLS project and the characteristics of the recruitment process in the Polish part of the study.

R e s u l t s: In Poland, 268 elderly subjects took part in the study, which constituted 69.1% of planned recruitment. The majority of participants were acute care patients (108 participants). A high percentage of people successfully recruited for the study was seen in nursing homes (83.5% of predicted number). The lowest recruitment came from primary healthcare (53 participants) and geriatric outpatient clinic (26). About a quarter of recruited participants were lost during follow-up period. The poorest results of control visits were observed among patients from geriatric wards and geriatric outpatient clinic.

C o n c l u s i o n s: The recruitment process for older people in Poland was satisfactory, mainly in hospitalized and institutionalized patients. The worst enrollment result was observed among outpatients. A detailed analysis of enrollment problems among the older Polish population is necessary to determine the optimal recruitment strategy and retain eligible study participants.

Outbreaks of typhoid fever for centuries decimated armies, cities and large hosts of people. Discovery of an agent causing such a grave disease became one of the most important achievements of bacteriology — science, which had experienced rapid development in the last quarter of the 19th century and changed the course of our civilization.

The article deals with the discovery of Tadeusz Browicz, Polish anatomopathologist, who in 1874 reported about rod-shaped “parasites” in viscera of typhoid fever victim. His achievement became shaded by the later discoveries of Eberth, Klebs and Gaffky, but as authors stated below, Browicz should be recognized with mentioned scientists as a co-discoverer of the typhoid fever bacillus.

The aim of the study was to assess the course of posterior interosseous nerve in the wrist capsule in the transparent method of nerve staining.

M a t e r i a l a n d M e t h o d s: Thirty dorsal wrist capsules were collected bilaterally from 15 donors (thirty capsules) within 12 hours of death. By the dorsal incision the capsules were collected in the same manner. The specimens were stained according to the protocol of modified Sihler’s staining technique. The preserved capsules were analysed under 8–16× magnification of optical microscope for the presence of major posterior interosseous nerve trunks, their major and minor branches, and nerve connections.

C o n c l u s i o n: The modified Sihler’s staining technique allows for transparent visibility of the nerves innervation the dorsal wrist capsule. However does not allow accurate assessment as histological examination, especially in evaluation of nerve endings, but it gives a significantly larger area of nerve observation.

Takotsubo cardiomyopathy (TCM) represents an acute systolic left ventricular dysfunction typically triggered by severe psychological or physical stress. Oncological patients due to emotional distress of the diagnosis, proinflammatory and prothrombotic nature of cancer and also physical stress often following complex anticancer therapies are at high-risk of TCM. Moreover, there are also few reports of TCM associated with oncological treatment, mostly chemotherapy. Recent data from large registries indicate a surprisingly high incidence of malignancy in TCM, significant differences in clinical characteristics and unfavorable short- and long-term clinical outcomes in this specific group of patients. Therefore, we present two case reports of TCM that occurred during active anticancer therapy. Both women were admitted with suspicion of acute coronary syndrome. The first patient underwent mastectomy two years before due to hormone receptor-positive breast cancer and on admission she was during adjuvant hormonotherapy with tamoxifen. The admission of the second patient was preceded by fifteen fractions of adjuvant external beam radiotherapy due to intermediate-risk endometrial cancer after radical hysterectomy. Based on coronary angiography type I of acute coronary syndrome was excluded. Both patients negated stressful situations in the period immediately before the symptoms onset. Within hospital course baseline apical ballooning observed in both cases fully recovered and enabled subsequent completion of oncological treatment in accordance with adopted treatment protocols without recurrence of TCM. To our knowledge, presented cases are the first reports showing direct relationship between TCM and adjuvant hormonotherapy with tamoxifen or pelvic radiotherapy.

An incarcerated epigastric hernia (localized in linea alba) is a very rare observation. Here, we present a case of a 66-year-old white male who was admitted to the emergency department due to vomiting and epigastric pain. On physical examination, the only observed abnormality was a painless soft epigastric tumor located in the upper midline, measuring about 12 cm in diameter. The patient claimed that he had the tumor for more than 30 years and it never changed in diameter nor caused him any discomfort. A lipoma was initially suspected. However, an ultrasound of the abdomen revealed an incarcerated stomach, trapped due to the defect in the epigastric abdominal wall. The patient was sent for surgery and the presence of an incarcerated epigastric hernia of the linea alba, which contained the anterior wall of the stomach was confirmed. The presented case confirms that the use of ultrasonography may be an effective method to recognize unusual types of hernias, and that ultrasonography should be routinely used in emergency departments.

B a c k g r o u n d a n d s t u d y a i m s: The aim of the study was to assess the usefulness of serum concentrations of YKL-40/ CHI3L1 (a 40-kilodalton glycoprotein also referred to as chitinase 3 like- 1 — CHI3L1) and PIIINP (N-terminal propeptide of type III procollagen), markers of fibrosis, in the monitoring of inflammatory processes and fibrosis in children with inflammatory bowel disease (IBD).

C o n c l u s i o n: Fibrosis was more severe in CD than in UC patients. The marker that more accurately reflected these differences was PIIINP.

Temporomandibular disorders (TMD) is one of the most common problem in contemporary dentistry. It is a term covering dysfunction of the masticatory muscles and the temporomandibular joints. Patients are suffering from severe pain, followed by limited mandibular opening and sounds in the temporomandibular joints during jaw movement. TMD influences the quality of life because the symptoms can become chronic and difficult to manage. Radiofrequency waves (RF) are electromagnetic waves with low energy and high frequency. They provide pain relief without causing significant damage to the nervous tissue. The RF therapy is commonly used for physiotherapeutic treatment of skeletal muscle relaxation, as a supportive therapy. The rehabilitation effect of these waves is based on diathermy by means of high-voltage quick alternating current. RF has also found application in physical therapy, as a therapeutic tool for various types of chronic pain syndromes. The aim of this literature review is to show the beneficial effect of radiofrequency waves on the pain of the masticatory muscles in the course of TMD.

O b j e c t i v e s: To identify tooth diseases as potential causative factors in the development of maxillary sinus lesions, with the aid of clinical examination combined with Cone Beam Computed Tomography (CBCT), in the patients with persistent sinus-like ailments, unresponsive to routine treatment offered by otolaryngologists.

R e s u l t s: In 15 (34.1%) patients the odontogenic lesions were encountered in maxillary sinuses. A total of 33 causative teeth were identified, of which 13 (39%) were after root canal treatment (RCT). Only one of the teeth had a properly reconstructed crown, and only one tooth had the root canals properly filled-in. Most frequently, the lesions in the sinuses were attributed to the inflammation of periapical tissues; the first molar having been established as the most common causative tooth.

C o n c l u s i o n s: A detailed dental examination, pursued in conjunction with CBCT analysis, allow to diagnose odontogenic maxillary lesions. The incidence of long-term ailments originating in the maxillary sinuses should prompt a detailed assessment of the teeth, especially those after RCT.

Chylolymphatic mesenteric cysts are extremely rare among children. Herein we report a case of a 3-month old infant that was admitted to the Emergency Department due to repeated vomiting. Preoperative ultrasonography demonstrated the presence of a thin-walled multiloculated cystic lesion in the right abdomen. Patient underwent then elective surgical excision. Histopathological examination documented the diagnosis of cystic lymphangioma type III, according to Lozanoff classification.

Proper heart’s nomenclature is very important in daily clinical practice and research studies, and when it is consistent, it can facilitate better communication between different medical specialists. The general rule of the anatomy is to describe organs and their structures in attitudinally correct position. However, the use of the old-fashioned Valentine position (where the heart is described as if it were standing on its apex) is still in use to describe important cardiac structures. Upon closer analysis, all main chambers of the heart and their associated subcomponents have mislabeled structures that should be renamed. In this article we aimed to emphasize the limitations of Valentinian nomenclature, present proper anatomical names of the most important heart’s structures and advocate to change certain mislabeled anatomical structures. Attitudinally correct designations presented in this study will benefit all medical specialties, and they will reinforce the importance of consistent orientational naming. Correct naming of heart’s structures will also help improve communication between different medical specialists.

Manuscripts will be considered for publication in the form of Original Articles or Reviews. Submitted work must comply with ethical policy, which is based on the Committee on Publication Ethics (COPE) guidelines on good publication. (http://publicationethics.org/). Only manuscripts that are previously unpublished, and are not offered simultaneously elsewhere will be considered. SUBMISSIONFolia Medica Cracoviensia only accepts electronic submission via e-mail at folmedcrac@pan.pl. Manuscripts will be assigned a unique manuscript number that must be quoted in correspondence. Papers and Reviews are refereed by experts in the field; the Editors reserve the right to reject an article without review. Please submit your covering letter or comments to the Editor as well as the names of two potential referees (including name, affiliation, and e-mail address). Currently, Authors have the only option to publish their articles in printed version. The online version will be available soon.Original ArticlesOriginal Articles describe the results of basic or clinical studies. The length of all Original Articles is limited to 6000 words, excluding acknowledgements and disclosures, references, tables, figures, table legends and figure legends. Please limit the number of figures and tables to a maximum of eight (e.g. four figures and four tables). Color figures can be included as necessary; however authors will be charged a fee (for details please contact editorial office). Review ArticlesTopical reviews of basic or clinical areas are invited by the Editor. Manuscript length is limited to 5000 words and 50 references. All Review articles are subject to review.LanguageThe Folia Medica Cracoviensia uses American spelling. Authors for whom English is a second language may choose to have their manuscript professionally edited before submission to improve the English.The complete set of instructions for Authors can be downloaded here as a PDF file: http://www.fmc.cm-uj.krakow.pl/pdf/Author_Guidelines_Folia_2017_Jul_31_KG1.pdf