ACADEMIA - The magazine of the Polish Academy of Sciences 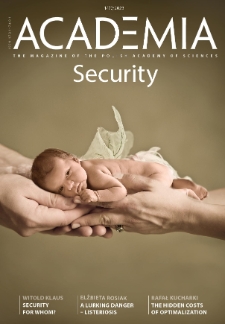 The „Academia” magazine was founded on the initiative of Professor Andrzej B. Legocki, a President of the Polish Academy of Sciences in 2003 – 2006. In the beginning it was published only in English as a reply to the growing demand for a current information on the Polish Academy of Sciences` activities, expressed by foreign scientists and Poles living abroad and interested in Polish science.

Since 2005 the magazine is published both in Polish and English.

The „Academia” is an exceptional - on the Polish market - scientific magazine for the general public, propagating achievements of Polish scientists here and abroad. Authors of articles in „Academia” explain their subject in a way that is accessible not only for all sorts of academics but also for students, pupils and all other readers interested in scientific topics for the general public.

Office for Popularizing and Promoting Science